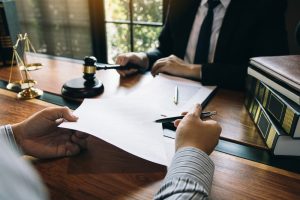 If someone detained or restrained you unlawfully, contact Wallace Miller immediately. You might be entitled to compensation for your physical or emotional injuries, losses, or other resulting expenses.

Someone who commits false imprisonment can face criminal and civil penalties. The offense is a type of intentional tort, meaning a person’s intentional actions harms someone. You can pursue legal action in civil court against the at-fault party for causing your injuries. The money you recover might compensate you for your medical treatment and other incurred costs from the incident.

At Wallace Miller, we understand the trauma you experienced. When someone holds you against your will, it can lead to significant physical and emotional strain. Some people require extensive medical care to recover.

You do not have to face the at-fault party alone. Let our team help you seek the justice you deserve.

Call the Chicago intentional tort attorneys of (312) 261-6193 for your free consultation to learn more about your available legal options.

The Fourth Amendment requires law enforcement to have probable cause to believe a person committed a crime before they can arrest them. If they don’t have probable cause and arrest someone anyway, it is illegal and a violation of the person’s rights. A false arrest also occurs if an officer doesn’t present the person they arrested before a court or magistrate within a reasonable timeframe or without unnecessary delay.

Unlawful restraint is the term for describing the criminal offense of false imprisonment.

According to 720 ILCS 5/10-3, a person commits unlawful restraint when they knowingly and without legal authority detain someone.

Multiple types of criminal charges can result from unlawful restraint.

720 ILCS 5/10-4 defines forcible detention as holding a person hostage to get someone to comply with their demands when the hostage-taker:

False imprisonment becomes kidnapping if a person detains someone for a significant period or moves them to another location. According to 720 ILCS 5/10-1, a person commits kidnapping when they knowingly:

False imprisonment can result in either a criminal or civil case. The primary difference between the two is the result of the lawsuit. A criminal case involves criminal sentencing, while a civil case involves monetary penalties.

A person convicted of unlawful restraint or another type of false imprisonment by the state can face a prison sentence, fines, community service, and other penalties deemed appropriate by the court. In an intentional tort lawsuit, the defendant might have to compensate the plaintiff if the judge or jury rules in the plaintiff’s favor.

Another difference between intentional tort lawsuits and criminal cases is the burden of proof required to prove the defendant committed the act. The burden of proof is on the prosecution during a criminal case. The prosecutor must prove the defendant is guilty beyond a reasonable doubt. In a civil lawsuit, the plaintiff must show by a preponderance of the evidence that the defendant committed false imprisonment against their will, and that those actions injured them.

Who Can Lawfully Arrest Another Person?

Specific individuals are legally allowed to detain people. For example, law enforcement members can arrest a person if they have a warrant issued by a judge.

However, an officer can arrest someone without a warrant if these circumstances exist:

Private citizens can also detain or place another person under arrest in particular situations. The individual making a citizen’s arrest must have probable cause to believe someone is committing a criminal offense other than an ordinance violation. They can prevent the person they’re detaining from leaving the area until officers arrive. 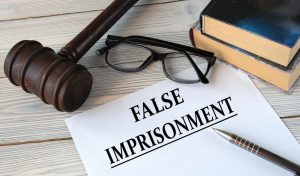 To establish someone’s liability in a false imprisonment case, you must prove these three elements:

Some groups of people are exempt from liability for false imprisonment, including:

If a judicial officer acts within their jurisdiction and in a judicial capacity, they are exempt from civil liability for the false imprisonment of another person. Officers in other government departments are also exempt if they exercise their judicial duty to restrain or detain someone. Attorneys are exempt if they act in good faith on behalf of their client while committing the act.

Compensation for Injuries from False Imprisonment

You could file a civil lawsuit against the at-fault party if you sustained injuries due to false imprisonment. You might receive compensation for your:

You might also recover punitive damages. This financial award punishes a defendant for their misconduct and is meant to deter similar acts in the future. You must show clear and convincing evidence of the defendant’s evil motive or conscious indifference to the rights or safety of others and outrageous and reckless indifference to a highly unreasonable risk of harm to be awarded these damages.

Statute of Limitations for False Imprisonment

In Illinois, the statute of limitations for false imprisonment allows a two-year timeframe to file a lawsuit against another party for compensation. That means you must initiate your lawsuit in civil court within two years of the date of the incident. If the statute passes before you file, you will likely lose your right to pursue compensation for your losses.

You might be able to toll the statute of limitations. That means the two-year timeframe won’t start until a specific event occurs. The two scenarios allowing the tolling of the statute include:

At Wallace Miller, we believe in holding people accountable for their wrongdoing. When someone injures another person, they should be liable for the various losses that result. We can represent you in your intentional tort case and seek the maximum possible compensation on your behalf.

If you were the victim of false imprisonment and suffered emotional or physical injuries, call us at (312) 261-6193 right now for your free consultation. We will protect your rights and fight by your side for justice.